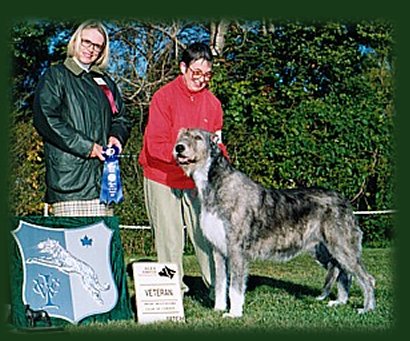 Moana, my "Lady White Stockings" was one of only 2 females in her litter of 7.  I was told I would be foolish to keep her no matter how good she was, as she would only face the same prejudice in the show ring as her great grandsire Socks because of her white stockings. The other bitch was larger, with almost no white on her feet, but there was something about Moana I could not resist. So this time I ignored the advice of well meaning friends and kept her, and I have never regretted it.
True, she did face some awkward moments in the show ring when an all breed judge would go to check the standard to see if it was allowed, then put her at the end of the line for making him look foolish. But she also had some very nice wins en route to her Championship under judges who knew our standard better. She was seldom shown as a special being somewhat in the shadow of her famous sire, but she did help him win many Stud Dog classes at specialties.
Moana produced 2 large litters, the first by Huhu, and the second , an outcross to Can. Ch. Blackwing's Oisin bred by Kathie Upton from Rionnageal hounds, who had combined well with mine in the past.  From this litter came 3 Canadian Champions before the age of 2, Ch. Belleghuan Aotearoa Guinness, owned by John and Jocelyne Ferguson, definitely the biggest hound I have ever bred, and a very successful sire, his brother Can.Ch. Aotearoa Mingo, my keeper, who also produced some fine progeny, and Can. Ch. Aotearoa Elspeth at Emrys who I co-owned with Lois Freedman who produced some lovely puppies sired by Aotearoa Inanga, a Huhu son, the most notable of which is Can. Ch. Emrys That Touch of Class, Mercedes.
At 4 &1/2  years of age, when her second litter was just 8 weeks old she suffered my first and only case of torsion in 33 years with the breed. She was one of the lucky ones and did survive, thanks to my observant husband noticing it quickly, and the expert surgery of my competent Veterinarian.  To have her with me after that until almost 10 years of age was a blessing and reward enough, but  the best was yet to come 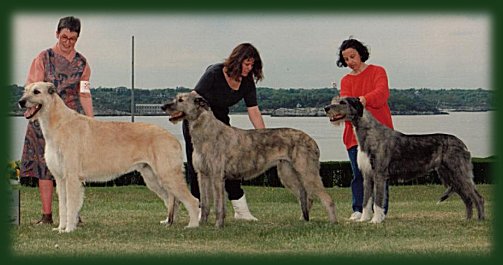 In June of 1997, at 7 & 1/2 years of age she won the Veteran Bitch class of 14 at the IWCA National Specialty in Lake Placid, NY, USA under American breeder /judge Beverly Little, whose critique was   "Beautiful type, with balance and grace. A lovely head and expression. Well filled front and brisket, and nice underline; showing her age a bit in the top line but it certainly did not hamper her movement which was easy, active, and flawless".  Later that same day she made the last cut in the Gait class along with her grandson Can.Ch. Lorence of Belleghuan.  Then, in September that same year she repeated her Veteran class win at our IWCC Specialty under English breeder/judge Dagmar Kenis-Pordham. She considered her white stockings an asset, and describes her as a   " Dark brindle bitch of substance, with lovely white stockings to offset her dark coat. Nice head and expression, very true front, excellent top line, croup, and hindquarters. Good tuck up for her age. Won the class on her free powerful enthusiastic movement. A seven year old in tip-top condition".   To win this honour at both National IW Specialties in North America in the same year was a very special thrill, and an exciting  finish to the show career of my  "Lady White Stockings".
Barbara Daley