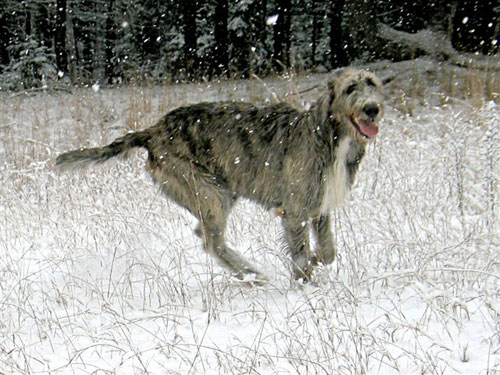 This beautiful girl is our "keeper", along with her brother Aotearoa Emrys Putu ( Kip) from a lovely litter of nine. We only planned to keep a girl, but Putu, or Kip as he was named by his best friend Norm Freedman won us over with his calm, outgoing personality... and his white boot. " Putu" means Boot in Maori. The charming photo above of Pokere frolicking in the first real snow of this past winter was taken at Keera's, Kip's and Mango's permanent home in Deep River Ontario in December 2010 at 18 month of age by Norm, as were the amazing photos of this litter from birth to 6 weeks of age which can be seen on the Litters page of my website. Norm and Lois bred, whelped and raised this litter. I did not see them in the flesh until they 6 weeks old, but already felt I knew them when they did come down here to me from the wonderful series of photos Norm sent so regularly.

At her very first show at just 6 months of age Pokere quickly proved she was a natural "show girl". At an all breed Sanction Match in Hudson Quebecon the 31 January 2010 she got off to a flying start with 2nd in the Bitches division of an all breeds combined Puppy Sweepstakes, then on the Winners Bitch over adults in the Regular IW classes, and Best Puppy in Breed and Group. She quickly finished her Championship from the puppy classes with 2 adult Group placements and 4 Best Puppy in Group wins in 2010. Also some nice Specialty class wins at IWANE in Warwick RI, USA, and at the IWCC National. She also won the 14th Best Head Class for the Aotearoa Irish Wolfhounds at IWANE in July 2010 under Irish breeder Judge Anthony Killykeen Doyle, a win to be cherished as he passed away not long after this show.