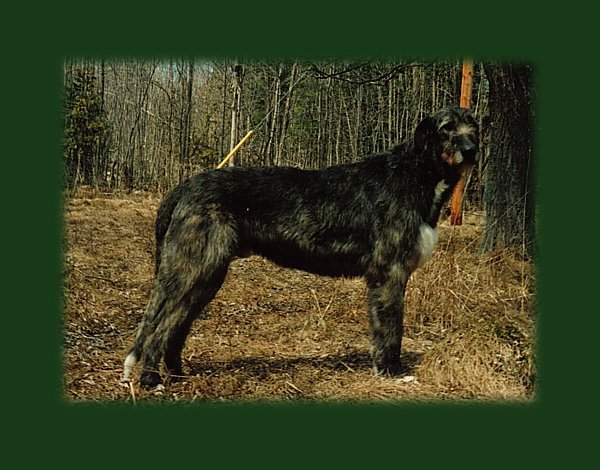 Hokioi was a fabulous mythical bird of Maori folklore from my homeland New Zealand. The name is a rendering of it's cry, but he was called Hoki. He was the only son of Can.Ch. Kimmeragh Rhona, who I had waited several years to import from England. She was closely bred on the Outhwaite line of Ronald and Helen Baird.  His sire was from my first litter from Can.Ch. Ballycastle Aotearoa Rata, sired by Multi BISS Can. Ch. Magmellan Fitzwilliam Avoca before he became so famous.
Even if I had had several males to choose from in this long awaited litter I doubt if there would have been any question that I would keep him. He was "special" from the moment he was born, exceeding even my most fanciful expectations. Now I know what presence meant!
Hoki was a strong, healthy puppy, and grew fast, but a youthful injury tore out an outside hind toenail leaving the toe sore and swollen for some time. When it eventually healed the nail grew back in slivers, into the toe, necessitating surgery to peel the slivers back to the nail bed. All this between 11 and 18 months of age left him with one hock turning in slightly.
In spite of this set back Hoki had an exciting Specialty career both sides of the border. He was usually the first pulled out and always in the final line up for to awards, although the final decision often went to less impressive, but apparently sounder hounds.
At his first IWCA Specialty in 1984 at 7 months of age judge Mrs. Kelly (Rosalie) Fox described him as "handsome and well made; ideal type in outline and head with true greyhound ears, beautifully placed; a somewhat tentative, though sound gait. This BEFORE his injury. At a later IWCA Specialty at 5 &1/2 years of age he won the Open Class under Mr. William Marriott, who called him an "Impressive, typical hound, very good front and fore chest, good bone, strong neck good depth and width, lovely strong hind quarters; moved well; a little long in the back for me."  It was gratifying for me that at least this judge could distinguish between and inward turning hock caused by injury and one caused by structural fault.
Hoki was a perfect companion, dignified and protective, but never noisy or obnoxious about it. Anyone walking casually past his van at a show would not likely even know he was there, but if they stopped to peer in a window, or touch the van he would give firm warning he was "on guard". I always felt safe with Hoki beside me on the many miles we travelled together.
Hoki sired 6 litters, from which came Canadian and American and International Champions that were as special to their owners as Hoki was to me. Two of the most influential were his sons , my own Can.Am.Ch. Aotearoa Irawaru of Emrys, #1 IW in Canada in 1992, and Int.Ch. Wolfrock's Arrow, #1 IW in France in 1989.
I hope I will always have his descendants to keep his memory alive. It was and honour and a privilege to have been fortunate enough to breed, own and show such a hound.
Barbara Daley
Aotearoa Perm. Reg'd. 1970