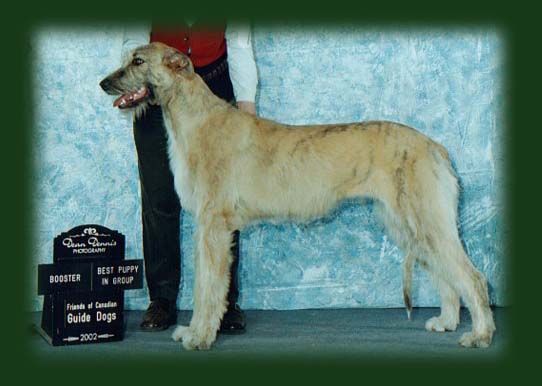 Mati is a very powerful, yet delightfully feminine bitch, a hard combination to achieve.  Her lovely face greets you on the "Girls"
entrance page. She was the obvious keeper from her nice litter of 8 in both confirmation and personality. Mati's puppy career was very exciting, winning Best puppy in Group at 4 or her first 5 shows. She was also Best Puppy at the IWCC Region Quebec Sanction Match in 2002 under Breeder/Judge Richard Staudt over a large puppy entry from Canada and the USA.  Her last time out as a puppy she won her first 5 points by going 2nd in Adult Group under respected all Breed Judge Fred Heal after taking Best of Breed over adult Irish Wolfhounds, and another best Puppy in Group. Mati also placed in her class at all 3 IW Specialties she attended in 2002,  IWANE, IWCC, & IWADV.
Mati's first litter was born 3 August, 2003, sired by my tall handsome 2 year old  boy Aotearoa Manuka 2nd who has some nice Specialty wins to his credit already, and just need 2 points to finish his Championship. He is pictured here at 18 months of age
after placing 2nd in Bred By Exhibitor males, the youngest in the class, under Breeder/Judge Lynn Simon at our 2003 IWCC National Specialty.
One of the males from this litter, Aotearoa Emrys Chadwick "Chad"  had an exciting show ring debut at 9 months of age at the IWCC Quebec Regional Specialty 29 May 2004 at just 9 months of age. He won both his Puppy Sweepstakes class under Breeder/Judge Emma Ross, and his Regular Class under Breeder/Judge Ika Peiler, and was a strong contender for Best Puppy in Show.  If I had entered in in the head class he might have beaten his mother Mati, who won my own Aotearoa Trophy for Best Head, a run for it.  However it was a real thrill to win this trophy with one of my own, to prove I practice what I preach about the importance of typical heads as a distinguishing feature of the breed.
Mati enjoyed her outing at this Specialty, and her trip the previous week to the IWCA Specialty in Lima Ohio where she made the cut to the last 6 in the strong Open Bitch class of 36 entries.. It was nice "fling" for her before her next litter is due 20 June 2004, a repeat of the breeding that produced Chad.
Barbara Daley