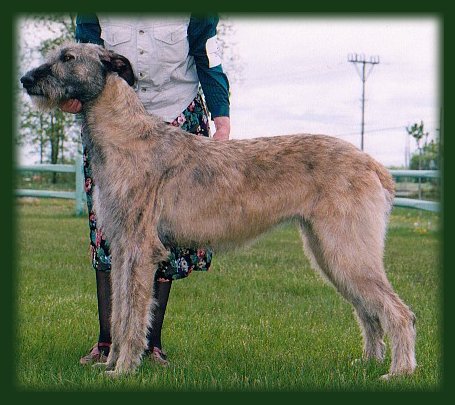 Denise's registered name Hihi Kata means "laughing bird" in Maori. She was always looking for some sort of fun, or more often mischief, to get into, hence her being called Denise. If she had been a boy she would have been called "Denis the Menace". She was the undisputed "boss" of her litter of nine, 5 girls and 4 boys, right from birth. She would work her way along the milk bar pushing all the others off just for the hell of it until she finally found what she considered to be the best nipple. Later, when they got teeth, if any of the others had a torn ear there was never any doubt who did it.

As she matured it became clear she was also the most intelligent Wolfhound I've ever owned. I have to really be one step ahead of her all the time or she will still rule the roost here. As you can see in the collage photo at handling class she is one of those rare Wolfhounds that will actually alert to a squeaky toy, or a judge rattling 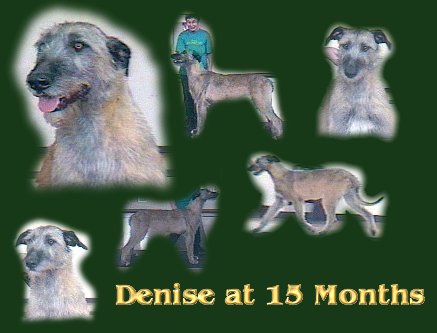 keys. The instructors at this class are German Shepherd people, and did not realize, as some judges don't either, that Wolfhounds are not meant to raise their ears, but keep them rosed. However, it does show their flexibility, and they always go back to the perfect rose again. This attribute did sway the odds in her favour in a some tight contests in the show ring though, and she finished easily with some nice wins.

Hers was a very even litter. I kept 2 girls, Denise and one of her sisters "Angel Face" until 14 months of age, and even then it was a difficult decision which one to let go. I still co-own a 3rd one from this litter. Some of the others had prettier faces, but I just could not resist Denise's personality.

Denise has had 2 fine litters of 10 and 14, and her 3rd due 01 March 04 looks as if it will be another big one. The sire this time is a tall, dark , and handsome young black male, Aotearoa The Rising of Tokelry (Bruce). As it will be a while yet before I get to his page I am including a picture of him on the litters page at 14 months. He is at the "long drink of water" stage right now, but the framework is there, with the long legs, neck, and body that I love, wonderful angulation for one so tall, and a typical, handsome head. I'll just have to be patient until he fills into that huge frame, then we should have some fun in the show ring. Bruce has a happy go lucky nature, he just loves the whole world, so this should be a very exciting litter mentally as well as physically.