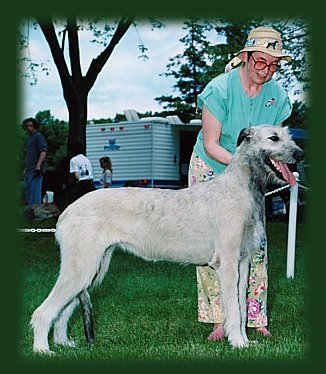 After my (mostly) successful outcross litter from Moana and Oisin I was eagerly looking forward to the next generation, breeding back into my own line. I had got the things I wanted, more size, bone and substance, and outgoing personalities, but a couple to things I didn't want, such as big ears and a bit too much coat. It was going to be interesting to see if I could keep the good thing while eliminating the  undesirables.

The first such litter was sired by Can.Ch. Belleghuan Aotearoa Guinness born to Can.Ch. Belleghuan Katanna, one of the Ferguson's 5 lovely Ira daughters.  I definitely wanted one of these puppies, and ended up taking 2 shaded wheaten girls. Tainui I kept, and the other went to Calgary, Alberta, Canada and became Can.Ch. Aotearoa Belleghuan Saoirse.

Beautiful, typical Irish Wolfhound heads are very important to me. I offer Perpetual and Challenge trophies at both our IWCC National Specialty and our IWCC Quebec Regional Specialty to emphasise the importance of typical heads as a distinguishing feature of the breed. It is one of my greatest ambitions to win one or both of these trophies with one of my own hounds to prove I practice what I preach. Tainui's head was in my personal estimation the loveliest of all I've owned and/or bred so far. The one year I had a judge who would have given it to her I did not have her entered. She was still a puppy, and I did not want to stress her with extra classes. This judge did consider the bitch I  entered, and she made the last cut, but he told me while her head was "very nice it could not compare to that puppy you showed earlier.  Her's was exquisite."

Tainui produced 3 fine litters by 3 different dogs. From the first, sired by Huhu came my 2 black beauties Can.Ch.Aotearoa Mangu Mumu and Can.Ch. Aotearoa Mangu Kui who will be 7 in March 2004.  From her second litter sired by Aotearoa Rivermead Rory I kept Can.Ch. Aotearoa Hihi Kata who has produced 2 fine litters already, and her third is due 01 March 04 sired by Kui's son Aoteaora The Rising of Tokelry. From Tainui's 3rd and last litter, sired by Rionnageal Tabor, came Can.Ch. Aotearoa Dubadeasa Castlekeep, Reserve Winner's Bitch at the 2003 IWCA National Specialty over an entry of 200+ class bitches. 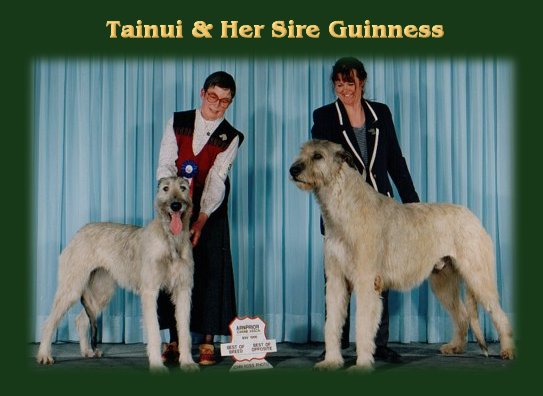 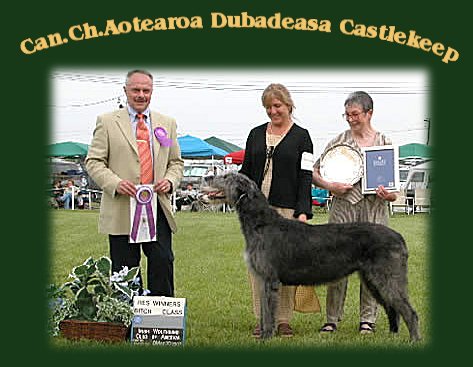