Pictured above  winning Group 4th on the way to her Championship at 18 months of age over Best in Show winning Champions from all across Canada gathered for the prestigious Ottawa Kennel Club Show of Shows for Best in Show Winner only in conjunction with the All Breed Shows Nov. 2008.

Sibyl is my keeper from Monster Girl's second litter.  It was not an easy choice between Sibyl and her litter sister Sophie. My keeper from Monster Girl's first litter was a male Ch. Aotearoa Tihi Aru, who went to live with his co-owner Kyreen Shorey, and has already sired an exciting litter born 26  August 2008 in with 4 Champions  finished before the age of 2 years. This time I was thrilled to have 2 such lovely girls to choose from as the only 2 girls in Monster Girl's first litter were already promised before they were born to homes in Texas and the Netherlands.

Sibyl is a most  a most strikingly unusual colour. "Sable"  I thought the best way to describe her , as she was certainly not wheaten, red, or brindle, but  still with the glorious dark ears and pigment so characteristic of  the descendants from Ira.  However I could not register her as "sable" because  the CKC does not recognize that as a colour, so I choose  "brown", the closest  I could find from the list of colours they DO allow.  However this caused problems with her AKC registration, as the AKC does not recognize the colour "brown" for IWs, so in the AKC records she is " wheaten".  As well has her striking  colour, she has  that correct dense, wiry coat, that lies close to the body that is a breeze to care for. Her head is typical in the qualities I strive for, correct shape and proportions, dark eyes, ears and pigment and with a special soft expression that is all her own. She has her dams powerful, well , angulated and muscled  hindquarters with great power and drive on the move. She is the sweetest and most gentle girl I have ever owned since her lovely dam Monster Girl. She does not really care for the show ring, but shows just to please me, and has had some nice Specialty wins along the way. 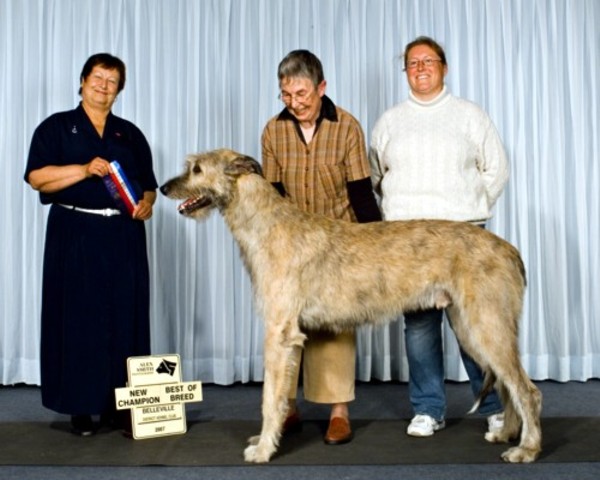