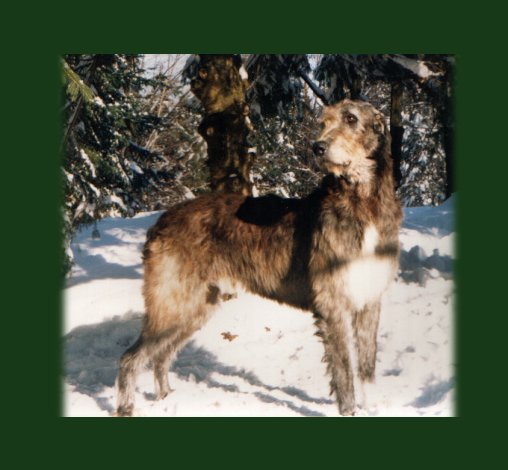 Picture at 7 years of age

Socks was my keeper from Rata's litter of 8.  I was told I was foolish to keep him with his white "sock" as he would be penalized in the show ring, which he was at all breed shows, that's why I got discouraged and never finished him.  However , although there were other nice males in the litter I was convinced he was the best, with the quality and presence I wanted.  I've never regretted my decision.  He was the first in a dominant male line of AOTEAROA Irish Wolfhounds that continues to the present day.
His sire, Willie bred by Dorcas De Villiers and owned by Mary Morrison was the first Canadian Bred Irish Wolfhound to win Best in Show at an IWCA Specialty which he did under Mary Jane Ellis in 1981. The following year he won Best in Show at our IWCC Specialty under Tom Fiddler from England. " Socks" won the Canadian bred male class at that same show.  I am rather proud of the fact that I choose Willie to sire Rata's litter BEFORE these 2 major wins.
I owe him so much for the qualities he has passed on the his descendants, in beauty, health, and his sweet and gentle nature.  One quality he has not passed on very often is his "smile". I wished I could get him to do it on command, to show his perfect scissors bite, but he would only do it when HE felt like it!