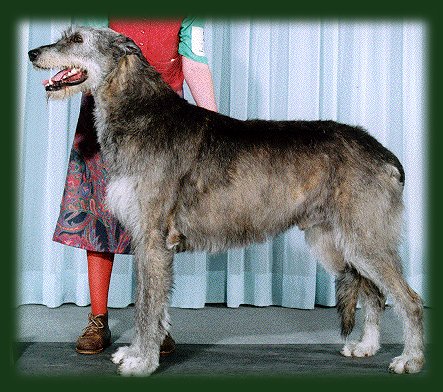 Huhu was my last Ira son, and a very important one in the ancestry of my hounds. When Gail Royer decided to breed her Suzie, Can.Ch. Rionnageal Siobhan, to Ira on the advice if Suzie's breeder Natalia Douglas I was delighted. I had always admired Natalia's Rionnageal hounds, and Suzie was one of the best.  I was eagerly looking forward to a puppy from this litter.
6 males and 1 female were born 31 May 1991.  This was Gail's first IW litter and she wanted to keep the only female, so I was given the choice of the 6 males. I chose Huhu because he reminded me of his grandsire Hoki.  He had what I called "that look of ages past"  dignified and distinctive, that reminds us that we are trying to preserve a very ancient breed.
Huhu's only sister Can.Ch. Alano Aisling,  Abby, went on to succeed their sire Ira as #1 IW in Canada in 1993, owner handled by Gail, quite an achievement for one's first homebred.
Huhu made a promising start on his show career coming in 2nd most of the time to one of his flashier wheaten brothers. This was quite a litter!  When the owner/handler of his wheaten brother took maternity leave from the show ring Huhu was ready to start to do some real winning.  Then something unexpected happened that put his show career on hold.  A family who lived close by and had a lovely girl of mine lost her tragically to an intestinal blockage at 18 months of age, and of course were devastated. They desperately wanted another hound as soon as possible but did not want a puppy, as both parents were working then. They promised they would let me show or breed any adult I would allow to come and live with them.  So I let them have Huhu as with his outgoing personality and laid back attitude I felt he would best fit into and be happy with this young, active family.  Huhu was is need very happy there, but busy with other dogs I never did get around to showing him, and his family really didn't have the time or inclination to do it themselves. However he did sire some nice litters during this time.
At 5 &1/2 years when his family moved to Florida Huhu came back to me. He looked splendid, now in his prime, so I decided to show him. He finished with ease on his 6th birthday, in spite of the fact he was rather difficult to show after being in a pet home all this time with only obedience training. With his outgoing personality he just loved all the attention, but he just could not get the hang of gaiting around the ring at a trot. He would just walk, or break into a gallop.  Also, when the judge approached and touched his rear he would sit, something which I never could break him of, However, he still managed to place in Veteran Dog classes at both IWCA and IWCC Specialties, and lived to almost 10 years of age.
Huhu's most significant contribution to the Aotearoa IW's was his litter of 6 born  6th March, 1997 to my beautiful wheaten bitch Can.Ch. Aotearoa Belleghuan Tainui.  My first blacks were in this litter, 2 females and one male. I kept the male, who became
Can.Ch. Aotearoa Mangu Mumu, and one female Can.Ch. Aotearoa Mangu Kui. Mumu and Kui, and their black sister Aotearoa
Mangu Rei, and another male and female from this litter will all be 7 years old in March 2004.
Barbara Daley